In November 2013, we participated in another celebrity gifting opportunity through The Artisan Group. This one was a little different in that we didn’t know exactly who we were gifting, only that she was a multi-platinum singer in her early 20’s, and our soap would be going to her, her band, and her crew. The mystery made it exciting, as well as adding a level of complexity since we usually make our soaps with something specific in mind. After much consideration, we decided on an edgy, glizty, glammy black-gold-and-silver bar with a unisex fragrance, which we named Rebellion. After a several-week wait on pins and needles, we learned the identity of our mystery recipient – Selena Gomez! After her sold-out concert at the Staples Center in Los Angeles, she and her band and crew attended an after-party backstage where they received our handcrafted products. This experience had such an impact on us, we even wrote a blog post about it! 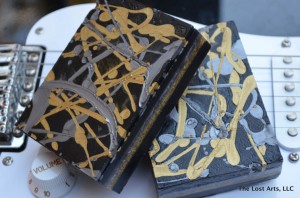 In July 2013, the Lost Arts had the opportunity, through The Artisan Group, to participate in a group gifting to actress and producer Stephanie Drapeau, listed among the “most beautiful” women and “people to watch” by IMDB. She’s also the VP of One World Foundation which strives to cultivate Human Unity by fostering harmony among people of all classes, ethnicities and religions, and by empowering children to become active citizens of the world. We sent her a lavender gift set which included “Layered Lavender” and “Natural Relaxing Lavender.” 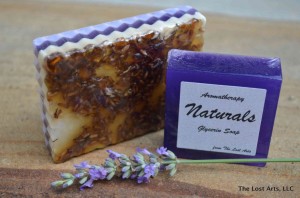 Kind and appreciative Stephanie then personally tweeted each and every artisan who had sent her a gift. Here’s what she had to say to us! 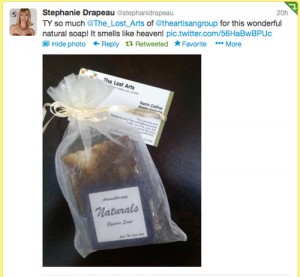 In May 2013, the Lost Arts gifted 55 bars of our “Water Lilies” soap to GBK’s 2013 Cannes Film Festival Celebrity Gift Lounge through The Artisan Group. You can read more about this awesome opportunity on our “In the Press” page. 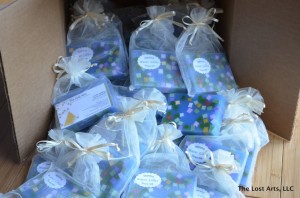 In the spring of 2013, The Lost Arts had the opportunity, again through The Artisan Group, to participate in a group gifting to the Academy Award winning actress Renée Zellweger. Renée received a bar of our “Champagne Kisses” glycerin soap. See our blog post for a peek at her handwritten thank-you note to the group! 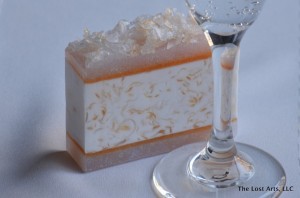 Also through The Artisan Group, The Lost Arts had the opportunity to gift television personality and former model Brandi Glanville. Brandi is best known for her role on Bravo’s The Real Housewives of Beverly Hills, as well as her 2013 book, Drinking and Tweeting: And Other Brandi Blunders. In addition to a selection of handcrafted items from other Artisan Group members, Brandi received our “Don’t Get Your Panties in a Twist” glycerin soap. 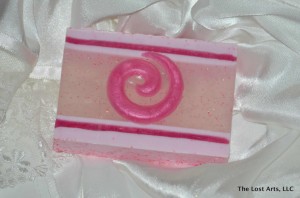 Don’t Get Your Panties in a Twist! handcrafted glycerin soap